Amazingly you can make the CPU version of Deep Art Effects anything from 1.5x to 4x faster.

This works on newer computers with the current version of StartDAE. If your machine is over about 5 years old this wont work – we intend to solve this problem in the future. 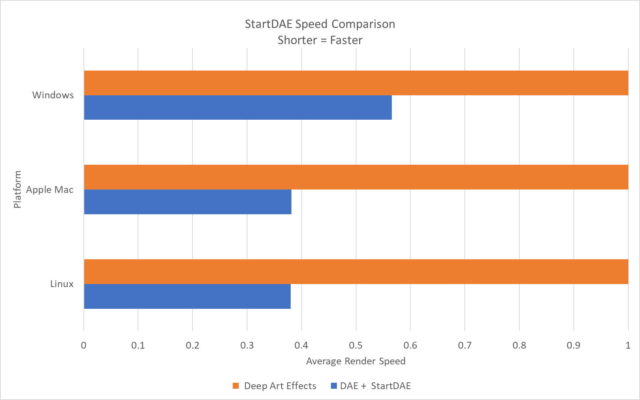 StartDAE only launches Deep Art Effects, it doesn’t go anywhere near the original program. If you try StartDAE and it doesn’t work (CPU not new enough), no problem – just start Deep Art Effects normally, we haven’t altered it in any way.

If, as is almost certain on newer computers, StartDAE works then you have to use StartDAE to get the speed increase. Try it out Load Deep Art Effects with a big image and time it then so the same thing using StartDAE – the result will be much quicker.

StartDAE is released as DonationWare. You don’t have to pay for it (technically StartDAE is not free, some people just decide to pay zero). The effect of not making a donation is merely to make us loose interest – if nobody donates then obviously nobody wants us to create updates and upgrades.

We use cookies to ensure that we give you the best experience on our website. If you continue to use this site we will assume that you are happy with it.Ok